Imagine you’re 15, and you already know what you want to do with the rest of your life. You have always been fascinated by war, by weapons and destruction. Of course you are naive, but you don’t know this, and you may never really figure this out.

You watch in a classroom as planes fly into The World Trade Center. As you watch, people jump, plummeting to certain death rather than burning alive. Something inside you catches fire. You were bullied once, by your father. You learned never to let that happen again. Now you find yourself drawn to a coming battle; you realize at that moment you will be part of that battle, but you don’t realize the cost that will be associated.

It was in 2004 that you finally make the decision to enlist. For a long time you have planned to join the military, but that was sadly as far as your planning has gone. You don’t know the difference between the branches other than boats, planes, and tanks. You are ill prepared to make such a life decision, especially at seventeen. You have done no research besides watching Black Hawk Down and Saving Private Ryan, yet you still walk into the Army office, but only because the Marines happened to be at lunch. You tell the lone recruiter in the office you want to join. He tells you to fill out this card with your info, and he will call you back. It feels very anti-climactic. He calls after a week and in a blur you are in Basic Combat Training at Fort Benning, Georgia, to become an Infantryman. You learn to hate that place.

You end up in Fort Drum, New York, with the 10th Mountain Division. This is where the real training begins. You are to be a light fighter, a name steeped in history. You are training to be a damn dirty leg. You make friends, party your ass off, and sleep in the mud. They are training you to be a killer, or as your squad leader puts it, a human chain saw. You fall in love with machine guns. The firepower excites something deep inside you. It allows you to unleash that slow burning rage that’s been there for so long in three to five round bursts. You try out for a gun team, and they make you an ammo bearer. It’s the lowest position, but you’re that much closer. You eventually move up to gunner and find your home. For two years you train your ass off, impatiently waiting for orders for your unit to send you overseas.

It’s February 2006 and you are finally getting on a civilian commercial plane headed for Afghanistan. They take everyone’s lighters and make everyone pack their knives before boarding, but you’re allowed to take your unloaded M-16 into the cabin. This still confuses you today. Since you have arrived in the winter the battlefield is quiet. You will learn that Afghanistan has a fighting season. The insurgents lack the equipment to fight in the low winter temperatures. They still attempt to hit your base with rockets and mortars almost daily. At first you are nervous, but with the frequency, they quickly become a nuisance.

Spring has come to the Bermel Valley and with it Third Platoon came into contact with the enemy. You are, of course, jealous. No one was hurt, and it seemed that they caught the enemy by surprise. 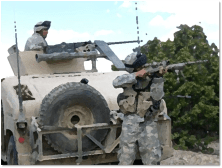 Two weeks later I’m in a fight for my life. My platoon is caught in a textbook L-shaped ambush. I’m a gunner in the turret of a Humvee. All hell breaks loose and at the same time, time slows to a crawl. I duck down and look up, watching tracers from a RPK pass inches over me as well as ricochet off the armor. RPG’s explode off my vehicle. I can feel their hate from every shot fired.

If I could run or hide, I would. It’s a terrifying feeling when someone tries to violently end your life. My Platoon Sergeant shoves me back up through my hole and tells me to shoot. When shooting a machine gun, you’re supposed to shoot in bursts.

Well I pull the trigger down and don’t let go.

We fight through the ambush and limp home with our tail between our legs.

That day my sense of safety was taken away.

I thought killing someone would be hard. It wasn’t. A simple squeeze of the trigger and a human being becomes a lifeless corpse. Living with it is the hard part. It makes you different from other people. You have no one to relate to about it. Those that have don’t talk about it, and those that haven’t wouldn’t know what to say. It’s a burden that we carry around secretly. Even though I always returned fire, and never shot first, who was right and wrong doesn’t feel as important after the fact: just who lived. That day my innocence was taken.

A medevac call comes over the radio from Third Platoon. A vehicle has hit a mine. My platoon rushes to their position to provide aid. All five occupants are injured, but one is critical. We spread out and pull outer security as we wait for the medevac, but all eyes are on Cole. I watch as he struggles to breathe. I can tell he will die, and I feel guilty for condemning him.

I lost a friend that day.

I made it through 17 months of deployment, 17 months of walking up and down mountains carrying hundreds of pounds of gear, 17 months of getting shot at by rockets, AK’s and machine guns. And none of that was as hard as the loneliness I felt after getting out. While you’re in you have brothers that serve as a pseudo support group. Since you are all fucked up together, it seems normal, but out in the real world you seem to be alone.

I have always hated asking for help; to me it was weak. In the Infantry weakness is something you can never show. I would rather sit and suffer than admit I need help. So I did, and of course nothing got better; in fact, only worse. I let the lights dim until I was alone in darkness. I had made a plan to kill myself. To be more specific, I bought a gun to blow my head off.

Suicide is very selfish, but I couldn’t see that at the time. I forgot about all the great things in my life, especially my wife, who has been there for me more than any other. It sadly took a friend killing himself to cast a light on my decisions. I saw myself in his exact shoes only a couple months away. I got to live through suicide in his death. He saved my life. He allowed me to see the pain I would inflict on everybody if I followed through. That’s not the guy I was, or am.

This isn’t a story I wrote so you would feel sorry for me. You can keep your pity. I wrote this story for anybody else than stumbles in this journey of life. Obviously I didn’t do it. I set aside my hubris, a weakness, and found help.

I will leave you with the motto of the Infantry: