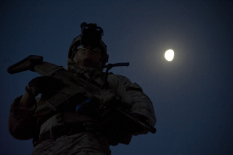 As I sat in the darkness in the cold crisp night air, the only sound was the beating rotors of the Chinooks leaving in the distance and the occasional bark of a dog. Nothing could be seen through the battered night vision goggles that turned the black into a fuzzy light green. Nothing but shadows. The mission was like so many before: to look for the enemy, their weapons, and do our best to disrupt their movements.

After sitting at the drop off for maybe 15 minutes, I picked up my pack and began the hike. I always hated the walks high up in Afghanistan’s mountains, but I loved them as well. The strain of the hike was brutal. The heavy gear and pack would test every muscle, and that long hike in the cold darkness would take us higher up the mountain as we hoped to gain a vantage point. As we climbed along the loose rock and dirt, we periodically stopped to study the shadows. We would then set into position and wait for the dawn to break.

I was just 20 years old at the time, assigned as a gunner on the 240-Bravo machine gun team. Sweating and tired, I was ready for the break and to sneak in a little morning breakfast. At daylight we would be off again in just a few hours. 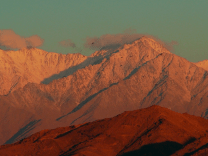 I sat there in my rocky uncomfortable position watching the sun rise above the mountain ridge across from me. This was one of the reasons I loved the early morning hikes. Afghanistan, while a dangerous country, was beautiful, and high up in the mountains early in the morning watching the sun fill the green valley below was a sight I will always remember. With the sun came the heat, and with the heat would come the sweat. Nothing moved but the occasional goat herder. No enemy to be seen as time moved slowly. I told my assistant gunner, or “AG” for short, “Keep a sharp eye out because you can bet that they are watching you.”

Finally the time came to move and make our way down the mountain. On the way we would search out Taliban fighting positions and mark them for future fights. I watched carefully in front of me, noting where to step because one bad move up here and you could fall for a while over some rough terrain. In the daylight we moved constantly because we didn’t want the enemy to maneuver onto or around us. I remember between the heat, weight, and boredom sometimes I wished for something interesting to happen. I wished for anything so I could feel like the mission would have a sense of purpose. I knew these wishes were dumb and best not wished at all. Quiet days have less risk, but I know most of us still wished strangely for that action.

Then up on the side of that mountain as we crossed a seemingly peaceful and terraced meadow, it happened.

Shots came down from where my platoon had been only hours before. I ran to the nearest cover and prepared my gun for a fight. A large boulder makes a nice place to be when gunfire is raining down. Next I heard yelling as we tried to figure out where the enemy was and if everyone was okay. My assistant gunner screamed “Contact 9 o’clock, 300 meters, small arms fire!” Then the obvious order “Shoot back!” my LT barked out impatiently. I was no longer thinking about how tired I was or if I was hot or if my pack was too heavy. All of that had gone out of my mind as I focused every thought and instinct on this fight. The reason for the mission seemed now at least to have purpose. Now I felt the adrenaline running through my system as I pulled the trigger to my machine gun, sending rounds back at an enemy—this enemy who was sending rounds at me and at my platoon.

“Keep the rounds linked and coming fast,” I told my AG as I could hear them whizzing and zinging by ricocheting off nearby rocks. Minutes raced by, seeming like seconds in a situation like this. Before I knew it, 45 minutes had gone by. At this point the thrill and rush was over and I just wanted it to end.

As the end of the fight neared, Kiowa helicopters appeared in the bright blue sky and started firing their rocket payload to cover us as we began to move. This stopped the fighting as it usually did. Now realistically all I and my friends could think about was getting back to base to relax and get some food.

But as we descended the mountain with the base in sight, another set of shots rang out and another fight ensued. This was common up here in this hostile terrain. My squad leader this time casually said, “Here we go again boys. Pour it on them thick and don’t let up.” I replied with a simple “Roger Sergeant,” and set up and began to fire once again. I was relieved that after just 15 minutes of fighting we got some artillery rounds for support. The fighting stopped for good and we continued on. 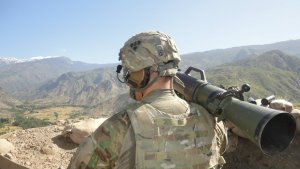 Whenever I saw the beat-up iron gates of our base, I felt a sense of relief. I knew the day was done. I had done my job and came back. I remember we would all gather inside to clear weapons, talk of the day’s events, and clear the rocks from our boots. This would happen for a few minutes before we headed off to our little wooden rooms for some well-needed rest.

But soon we would gather again to prepare our equipment to head back out the next day to do it all over again. To me and many other combat veterans who were deployed in Afghanistan, this was our job. Nothing special or out of the ordinary. It was expected. It was just another day until we could come home.