Musings from the Burn Pit

As the hot Iraqi sun beat down on me, the stench of burning human waste rose into the air. The sweat gathered in rivulets on my brow and poured down my face. The streaks of sweat were blackish, as the ashes from the burning shit drifted down and settled on my head and shoulders. They would mix with the sweat pouring off my body as I worked. I could see it dripping off the end of my nose, the realization of what it was making my suffering all that much more miserable. I continued my grim task, stirring the JP8 into the viscous mixture while it burned.

I pondered how I had come to this predicament. This was surely as unpleasant a job as any in recent human history. But alas, it was mine and mine alone. And so I burned on, stirring, pouring diesel, igniting, repeat—until all the shit was burned away, the shit of 150 fighting men who for months ate a consistent diet of MREs, beef jerky, Pop-Tarts, Top Ramen and Rip-its. The foul mass would slowly burn away pound by pound, until nothing was left but a thick ashy clump that could be thrown away into a bigger burn pit.

And then again the next day, and the next. 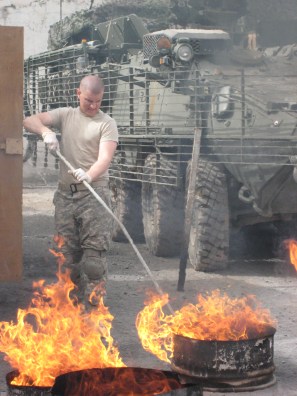 A few months past my 19th birthday, I found myself in an infantry platoon in Iraq. It had all started about a year and a half prior to my current situation. I had enlisted in the Army, went to basic training, graduated and was sent to Ft. Lewis, Washington. A year or so afterwards, we deployed to Iraq in support of Operation Iraqi Freedom. The deployment had its fair share of ups and downs, and now it was at its lowest point thus far. Each day I woke up, I dreaded, for I knew that soon I would be under the blistering sun. The essence of war, death, and decay would soon assail all my senses and pervade my very being.

For an entire month in 2007, this was my life. I was paying a severe penance for a breach in military protocol, something that had seemed so minor for the punishment that ensued. I had told a newly promoted Specialist, who just previously had been the same rank as me, to go fuck himself. He was already feeling the effects of rank, turning on his former peers with an enthusiasm which delighted the leadership in our platoon and disgusted the lower enlisted men. This case certainly was not unusual, as far as guys going on power trips whenever they suddenly had a little significance on their chest. However, on one particular day, I was in no mood for getting flak from a newly promoted Specialist, especially one who was not very admirable or proficient at his job.

So it was little regret at the time when I heartily told him to go fuck himself, in the most direct way possible, to ensure that even someone with as low intelligence as he could understand.

Unfortunately, my squad leader, Staff Sergeant Ena, did not agree with my assessment that SPC Dickbag could go fuck himself.  SSG Ena was a big, mean, pissed-off Samoan from Vallejo, CA. He was one of the few soldiers I had ever met who had fought in two wars: the first Gulf War and the second Iraq War. He was a hard core, seasoned combat veteran and was a stickler for military bearing. He was definitely a man I wanted on my side in a firefight (of which we went through several together), and he was definitely not a man who I would want pissed off at me. That is exactly where I found myself that day. And so, after a loud and heated ass-chewing, I found myself banished to the shit pits, to forever stir and burn human shit for all of eternity, much like Sisyphus and his large boulder. Sisyphus, however, had the advantage of not having a burning pyre follow his every movement, smothering his every breath and searing his lungs. I discovered that time has a peculiar way of slowing down whenever life takes a downturn. It was certainly a setback in the morale department. And so for one month, every damn day after a four hour guard shift in a guard tower, I would download my gear, trudge to the shit pits, and begin my unenviable chore.

Pulling the drums out of the outhouse was the first step. There was always the risk of spillage, as I had discovered the hard way months before when first taught to burn shit. Caution had to be exhibited when pulling out the heavy cans. Looking into the barrel was always a disgusting spectacle, but one to which I quickly grew accustomed and subsequently indifferent. Shit of all shapes, sizes, colors, consistencies, viscosity, and fragrances. Piss soaked throughout the entire can, with crumpled toilet paper and baby wipes covered in every human bodily fluid imaginable floating in clumps. It was always covered by a vast cloud of flies, which buzzed around the entire latrine area incessantly. The only relief from the writhing mass of parasitic bastards was once the waste barrel was lit. The thick noxious smoke would roll over the area, vanquishing the hated flies like the campfire smoke cleared away mosquitoes back home in Washington. It is a strange human sensation to have one miserable condition replaced by another, one that makes me look back and chuckle at it. I remember visiting my father in California after basic training, and we watched the movie Jarhead  together. We laughed at Swafford’s predicament in the movie, where he is made to burn all the shitters in his battalion’s AO as punishment for drinking contraband alcohol. Little did I know that I too would one day burn shit, although my infraction was not nearly as serious as Swafford’s. In that same scene from Jarhead, a major approaches Swafford as he stirs the flaming shit canisters. He orders Swafford to replace one so he can partake in his “morning glory.” I had a similar experience when a platoon sergeant from another platoon approached me and berated me for not leaving one shit can available for use. From that day on, I left one can on active duty at all times, ready to be used when needed–which was often, because soldiers do not stop having bowel movements.

During my time in the Pit, my comrades would come to use the latrine, and I would often hold conversations with them. Most had empathy for my plight, while others would laugh and crack jokes at my misfortune. I would often join in the laughter, as some hilarious and insightful discussions would follow. One would think that having to do such a terrible job every day would leave me pissed off and hostile, but misery loves company.  I got to know many members of my company during this time, as well as knowing the specific shit schedules of certain members of the company. The First Sergeant would arrive daily like clockwork. He had a rigorous schedule, and his daily visit to the latrine was as predictable as the sunrise.

“I shit once a day, twice if I have the runs,” he would say in his gruff voice, before shuffling off to go about his day. He would often be chomping on an unlit cigar, and would toss the stub into whichever can I happened to be stirring at the time.

I had about a week left in the month-long ordeal when I came to the realization that if I simply poured the cans into the adjacent trash-burning pit I could finish the job much faster. My only qualm was that if SSG Ena should come by and see me taking a shortcut in the work, he would go ballistic and assign me more grueling punishment. However, my fears were overcome by my desire to be done and away from the burning shit cans, and so I began pouring the cans into the burn pit. This made the task much simpler. Instead of taking two or sometimes even three hours to burn it all down into a crispy chunk of incinerated fecal matter, it now took me fifteen minutes to drag all the cans to the edge of the burn pit, empty their foul contents into the fire, replace the cans and walk away. Life became much more enjoyable after this, although I still always had an eye open for SSG Ena.

On the last day of my sentence, I went about my chore as I usually did, dragging the cans to the edge of the burn pit. As I did, I saw SSG Ena walking toward the latrine area.

As he approached, I sadly looked about the Pit and realized I would probably be burning shit every day until we went home. As I prepared for the verbal assault sure to come my way, I closed my eyes and tried to accept my grim fate. SSG Ena walked up to the edge of the burn pit.

“Are you tossing it into the burn pit?” he asked. Seeing no point in lying, I admitted I had been. “Hell, man,” he said. “Why the hell weren’t you doing this the whole time? Would’ve saved you hours.”

I could only numbly nod my head as SSG Ena walked away.

“Work smarter, not harder, Campos,” were his parting words.

All in all, I would say that this experience, while humbling, also left me with the knowledge that there’s not a whole lot worse I could face than burning shit for a month straight. I use this fact to motivate myself whenever I am worn down by the toils of life that are stressing me out. It could always be worse. I could always be stuck back in Iraq, stirring a burning shit can down to nothingness. 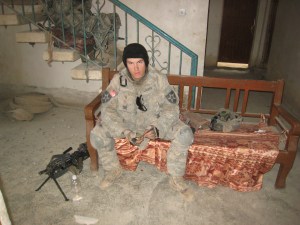 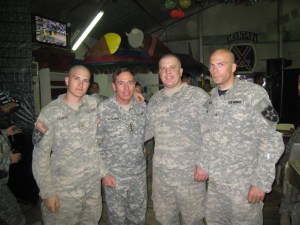 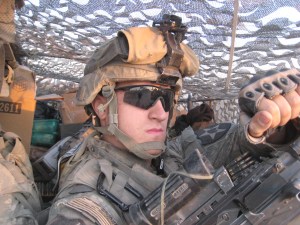