Brilliant shades of red, orange and yellow all mixed together spread around like paint, a little dark crimson here, a splash of carrot orange circling around and a dash of sunflower yellow there near the middle. From our ship, the USS Leyte Gulf, I remember the darkness of the ocean and the reflections from that night like a painting, beautiful yet horrifying.

My desktop finally loads up and the screen flashes 2130 March 15, 2011. I never quite feel like I know what day it is out here; working seven days a week in the middle of the Arabian Sea is taking its toll. I spend what little time I have before my flight, reading emails from home while waiting for my crew to arrive for our flight brief at 2200. Tonight we are scheduled to fly for three hours on patrol, which is the same thing we have been doing since we arrived here about a month ago. Having the only helicopter attached with a night camera in the whole battle group, we’ve been placed on the graveyard shift for overwatch.

The phone next to me breaks the silence in the room; I answer “Aircrew Shop, AWR3 Bertelson Speaking.” An unfamiliar voice comes over the phone: “Report immediately to the Combat.” Click! The conversation is over. My mind begins to race. I know this could only mean one of two things: my flight is canceled or we are getting a mission passed over from the USS Enterprise, what we call The Big E. I make my way up to what we call Combat, silently hoping our flight has been canceled due to maintenance so I can have a much needed night off. As I open the heavy steel door and enter Combat, I realize immediately that tonight isn’t going to be a night off. Everyone is buzzing.

Hastily I make my way over to the TAO watch station. I can see that Lieutenant Gleason and Lieutenant Junior Grade Perry have received a similar call and are standing together around the Tactical Action Officer discussing what I can image are orders from The Big E. Moments after I arrive, Mrs. Perry—a short female pilot with a witty sense of humor—notices I have arrived and am standing behind them.

“Hey Squirt!” she says. “We got word from The Big E of an ongoing pirate attack south of here.”

Mr. Gleason, a tall male pilot with the an older brother type persona, cuts in: “USS Leyte Gulf has been ordered to depart the battle group and head south where we will launch to provide assistance and relay video back to Combat for further analyzing. We have an hour till we are in range.”

That hour flies by. Preparing for a flight normally takes two hours at a minimum, but with the help of another aircrewman, we are able to complete all preparations on time for launch. As I climb into the cabin moments before starting up our helicopter, my mind starts flashing through hundreds of scenarios that we might be flying into. Have the pirates taken the ship yet? What might happen to the crew? If so, will we be able to help them? These are just some of the main thoughts that flash through my mind. Mr. Gleason breaks the silence and the tension: “Aircrewman Prestart checks!”

“Complete!” I report back.

The engine begins to roar over our heads, and the rotor slowly creeps around. I watch the blades move round and round. They move faster and faster until they become a blur and an unsteady beating sound. A moment passes and the sound becomes evenly spaced. It has reached speed. “Harness check, harnesses locked left!” Mr. Gleason starts a chain reaction.

“Harness locked back,” I instinctively reply. 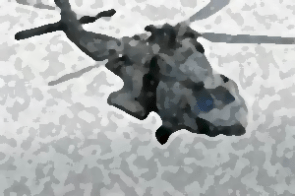 I feel the helicopter kick as we lift off the narrow flight deck. The nose begins to turn out to the left, and now we are face-to-face with seemingly impossible darkness. We push our head down and rapidly move forward into the darkness. The black ocean and night sky are seemingly impossible to differentiate on this dark moonless night. We are forced to rely solely on our instruments to distinguish between the two. As I look back at the USS. Leyte Gulf, watching it shrink as we get farther and farther away until it becomes nothing more than another shining dot on the horizon. And then it completely disappears.

Thirty minutes after liftoff, we are approaching the coordinates where the ship is intended to be. I know my next job is going to be marking all contact on my radar, and we will have to call out to pin point the distressed ship. My radar illuminates three different ships in the general area. Mr. Gleason calls out over his radio: “Distressed Ship, this is US Naval Helicopter 514, responding to distress call.” The radio quietly cracks for a few moments. Finally a response comes across in a thick Australian accent: “Navy helo 5-14 we have been boarded by pirates. The entire crew is held up in our citadel.”

“How many crewmen are there and do you have control of the ship?” Mr. Gleason asks.

The Australian crewman replies: “We have 19 crewmen and we have control of the ship, but we don’t have a compass or map–”
Blaring heavy metal abruptly ends our communication. We have run into this problem with pirates before. Pirates like to disrupt conversations and make it impossible for information to be passed during rescue efforts.

All of a sudden one of the three ships erupts in a large plume of blazing light. It’s almost as if the pirates know we are not sure which ship is in distress and are sending us some sort of signal. Briefly, in a misplaced moment, the effect is beautiful. The fire places brilliant shades of red, orange, and yellow all mixed together on the ocean surface, spreading around like paint on the black ocean canvas.

Then all at once, reality hits me.

The pirates are trying to burn the crew out of hiding. 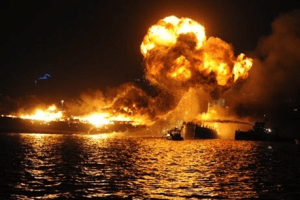