Four years old, so I was told, the slap of my bare feet on our floor, mitigated by my slow motion. Maneuvering through the rooms, maybe she didn’t feel like humming, maybe her throat was sore, maybe she used this day, this time to contemplate her departure. No such luck. Mommy is gone.

I was born in El Salvador and lived there until I was eleven. My memories of the clean breeze and the swaying trees surround the myriad children who kicked up dust as we navigated the rough terrain with ease. Free to run, climb on fruit trees, and roam the river banks without adult supervision, this was the norm. Now reminiscing, I realize how free in a third world country one could be. We kids swung from tree to tree like monkeys, grabbing this mango or that papaya, fighting over the ripest. The entire cluster of children in Tasmanian devil-like manner slowly made our way up and down our endless play pen until the sun was no more. 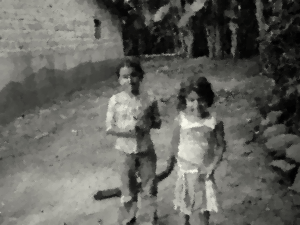 Suddenly it hit me. For weeks the grownups conversed and these key words came to mind, America, support, departure dates, be strong. Be strong? All these words dripped slowly down my cheek. I wondered where my mother was going, why she was going. I was small so I did not understand. I asked my older sister who was six where mommy was going; she said “to the U.S.” and I still didn’t understand. But what I do remember is that I didn’t want her to leave. Every morning she was always in the kitchen making tortillas by hand, or she would be by the lavadero, a manual washing machine where she washed clothes and dishes. Since I knew she was leaving soon, every morning I would wake up to check the specific spots where I knew she would be. Days went on until she was gone . . . when she was there no more I said to myself ya se fue and went about my day of playing and having many adventures under the mango trees, chasing chickens and running from chanchos.

Years later, after my sisters and I had moved to America to live with our mother, I fell in love with the man of my dreams, and little did I know that he too would leave me, causing yet another scar to my heart. 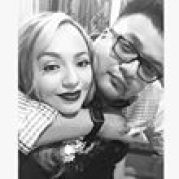 When I met him in 2002, I was sixteen and he was twenty. Later that year he decided to join the military. We quickly found ourselves in a long distance relationship since recruit training was hours away. During his training, he had orders to deploy with his first unit RCT1 or First Marines. With no time to spare, we were married in November 2003. Nothing about our relationship was “normal” by the time we got married. I was a senior in high school with a husband soon to be deployed.

That First Deployment would change our lives forever.

The agony, sleeplessness, anxiety while he was gone was unbearable. I would cry and cry myself to sleep every night. No one could relate to my situation around me. Distressed about another human being’s life, wishing to be in his place in case something bad were to happen—this is an inexpiable feeling. I watched the news nonstop, hoping to get a glance in case he was interviewed or shown on camera to reassure me that he was alive. I did not want to look out the window whenever a car engine stopped since I had seen movies where a red car pulls up to a driveway, and two men in uniform approach your door because your loved one is dead. And for weeks, days, hours, minutes and seconds you prepare yourself to receive the worst news of your life, all the while praying with all of your heart and hoping it’s not them at all.

Senior Ball? What? I am married and my husband might be killed! I had no time to worry about a stupid party or homecoming games or the senior picnic. Hand written letters became a priority in my life. I secluded myself from my friends and hardly spoke to my family about what I felt. Broken, suffering in quietness, and not knowing what to do with myself. Praying constantly for my other half to be free from danger and return complete to my arms. As time went on, a mix of emotions developed: resentment, feeling confounded, feeling out of place, no strong reason to act or accomplish anything. Never-ending distress everywhere, no matter where I went and no matter what I did.

Then the first battle of Fallujah began and I lost my sanity. Everywhere I turned the topic of over there and Marines are getting killed left and right was all I heard in the news. I wished to fast forward to a happier time. I questioned as he wandered in death’s shade if I would ever hug and hold my better half again. I shed tears under my sunglasses as I drove my Honda Accord to school and to work, trying my best to put on a delighted face as I whirled on the four-lane, burned out and wanting to let go of the steering wheel so the pain would go away. I didn’t want to imagine my life without him. Darkness and wanting to see the end of the tunnel, perhaps if someone would have told me not to watch the news or had informed me that no news meant good news, then maybe I would have not slid into a lasting depression.

As the white buses got closer, life felt dreamlike as if everything stopped. I remember the image still of us running into each others arms as if only we existed at that moment, pressing my hands on his chest to see if he was real and looking into his eyes and wondering if he was really there. Finally my love was home.

As expected, we moved in together outside of base into a one-bedroom apartment. We started our lives as husband and wife. It felt as if I had deposited all my fears and feelings and emotions into a savings account, afraid to share any of them now for fear that he might withdraw. After all, he could easily leave if he wanted to. He tried to help me, to go see the chaplain or a counselor or anyone I could open up to. No hope. I was stubborn. I was reminded about a particular time when I was about eight years old in El Salvador when I wanted to end my life for no good reason. Maybe I’d wanted attention. My mother would call from America and tell me how important I was and how everyone loved me. So why? Why did I want to end my life then, and why was I considering it now? I had a knife in my hand and all . . .

Living together for the first time as a married couple was a struggle. We both had changed, and I was not okay. Neither was my love, but at least one of us had to remain stable.

And then came a second deployment, in 2005. He was leaving me again. He waited a long time to tell me he had volunteered to fight overseas. This time around, though, after the initial shock, I was more experienced with living apart. This lifestyle had become the norm for us, the military life. Technology and social media were now more available to communicate with each other. It seemed in some ways we were closer when he was gone, even though our first years of marriage we lived far apart.

And yet I still experienced excruciating emotions from thousands of miles away. No wonder I had become so unbalanced. I had not signed up for this! When was this going to end? I thought about it a million times. I just wanted a normal life, but I found myself in a complicated one where my love was called on the rising of the sun and was sent half away around the world to fight a war, not one time, but three times. His last deployment in 2010 was fourteen months and was twice as hard as his first deployment since we had become parents not long after he returned home from his second time.

Deployments sometimes can serve as a catalyst for positive change, for re-unification, for a better appreciation. Not realizing what you have until it’s gone is a horrible feeling. Being able to express this appreciation when he returned would make it almost worth it. Yet he was not home yet. Would we part ways forever with our last communication being a fight? My overwhelmed, overworked, underappreciated heart could not—would not—tolerate this anymore. The savings account was full. No more deposits allowed. Tears as I walked from the grocery store to my car. Tears as I cooked for my daughter. Tears as I ran to the bathroom so no one could know, no one could see. I was reaching a point where I might explode in a river of pent up tears, an ocean of emotion, the dam losing structural integrity.

I stayed with my mother in law while he was gone. Never mind that I did not feel comfortable in his mom’s house, never mind that I had one room for myself and my daughter. I went from living on top of Camp Pendleton’s San Onofre Housing with a beach view from my backyard to a small dungeon deprived of light, deprived of life. Life is hard enough as a Marine wife. This time the dynamic was different.  During the other deployments I had stayed with my mother. This time I didn’t. During the other deployments we had no child; now we did, a constant reminder of him attached to my hip. My three-year-old princess Jasmine would have played and played, enjoying these new relatives, my husband’s mother, sisters and nephews. As I watched her play ever so innocently, the serious eyebrow scowl would come out, identical to her father’s, her mannerisms hinted more and more of him. I smiled as I cried and cried as I smiled, for that blessing was a curse. Blessing for my princess, a curse for the beautiful reminder.  “Mommy, where is Daddy?” It is a good thing she was so young; she would forget the strained veins throbbing on my neck and forehead as I tried with all my might to hold back the Pacific, as I failed to do when I explained that Daddy was working.

I thought back to that day when the white bus had ripped him away from us for those fourteen months in Afghanistan before he finally came home and left his military service. I remember how he struggled to hold back his tears as he called his platoon to attention, as he counted his Marines as they stepped onto that bus.

He was the last one on, but first he snuck over for one more kiss.

Then he was gone.

written by Yeny Perez-Lopez in Uncategorized