Losing My Mind to Find Peace

“Stop, stop, stop,” Thumper said as he broadcasted his message through our personal radios and alerted the rest of the convoy to halt. Everyone was familiar with the distinguishable call he consistently used when it was time to halt the convoy as a precaution to scan whatever was in front of us. Debris on this Iraqi road was common; we’d grown familiar with roads and what seemed out of place. About 100 meters in front of us, a trail of rocks resembling a straight line was laid out on the road.

Thumper, the security commander and lead gunner, stood through the turret of my HMMWV and leaned into his scope mounted on his M240 machine gun to scan for any other indications that we were heading into a possible improvised explosive device. Was it an IED this time? We wouldn’t take the risk of finding out the hard way, no matter how many times it turned out to be nothing. Before departing friendly lines, we would be reminded by posted signs about what happens when we fail to pay close attention. The signs posted on every entry control point read Complacency Kills. A grim reminder that people are out here to kill you if you give them the opportunity. Our battalion had sustained a number of casualties from IEDs, and every day one was found and disposed of in our area of operations. 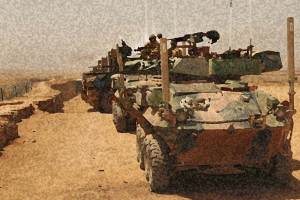 Thumper and I had shared the same HMMWV as the lead security vehicle for Titan, our platoon, for over four months during our 2005 to 2006 deployment. Being together on so many missions, we became an extension of each other’s senses. I would know exactly how to maneuver my HMMWV to allow him the need to zero in with his M240 at possible targets. Titan had become a well lubed, synchronized machine, an essential part of the Thundering Third to carry out counter-insurgency missions in the Haditha triad. However, this is what Marines are expected to do. Praise would have to wait until everyone set foot back in the states. Almost every day for over four months, Titan would run resupply or recovery mission in our AO, about the size of Alameda County. I’d grown attached to my HMMWV; I knew exactly where everything was placed, how much ammunition we had, how to troubleshoot the radio and blue force tracker. I took pride in being the lead vehicle for our convoys even though I knew the blast and shrapnel from an IED would easily blow through the armor of my HMMWV.

“Dismount and go condition four,” Pesci, our convoy commander, relayed to the rest of the convoy as we entered friendly lines. Another mission in the books I thought to myself as I unloaded my M4 service rifle. What day was it? It really didn’t matter. Titan had been up for the last sixteen hours, and we would be back on the road tomorrow or even later today if a recovery mission was needed. I felt the cold air on the tip of my nose as I lifted my head and let out a deep breath of air so I could see the condensation from my breath. It’s the end of February 2006, finally on the last stretch of our deployment. Thanksgiving, Christmas, and New Years have all just passed as another day that I’m thankful that I wasn’t blown up by an IED. For the first time in my life, death has been creeping around me so closely that I feel I’m playing a juvenile game of hide and seek with it. 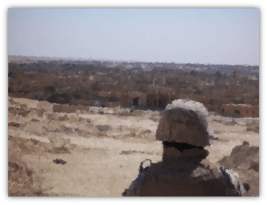 As my 22nd birthday approached, I couldn’t help but to count down the days until we were home. Strapping my boots up every day for the past five months with the only goal in mind of not getting killed had steered my emotions into an unfamiliar place. I couldn’t seem to find the joy in anything but the thrill of knowing that we were killing them before they were killing us. Driving through the cities, I would find myself thinking, “Somebody just shoot at us, please.” The shock I would feel in my chest from each round exiting the barrel of a .50 caliber machine gun would fill my body with the adrenaline I was craving. I needed a reason to yell out at the top of my lungs and set free everything I was bottling up inside.

My mind was conditioned to shoot targets, not people. But if necessary, I would kill to protect myself or my fellow Marines. I left my friends and family back home with the possibility of never seeing them again. Who was I doing this for? Was it worth it? I didn’t have time to contemplate. After all, I am where I volunteered to be. I asked to join this unit and to go to Iraq. I felt as if my time would go unfulfilled if I didn’t do my part while serving in a time of war. Everything leading up to this point was worth it.

By the end of March we were on our way home. Titan has sustained zero casualties. “How were we the lucky ones?” I asked myself. The roads we traveled were infested with IEDs; we had recovered dozens of trucks that were left resembling junks of twisted metal. We attended memorials of our fellow Marines in our battalion whose paths ended in a desolate road through the desert. Plain and simple, from the enemy’s point of view, Titan was at the wrong places for them, at the right time for us. Our success to elude death and inconvenience our would-be killers will forever be a mystery to me, but I can most earnestly say that by not having to experience any of my platoon members being maimed or killed, I can close this chapter in my life peacefully without any regrets.